Due to current demand in these crazy times, we currently only have limited stock.
If it's not marked as sold out, it's still available. Thanks for your understanding and stay safe! 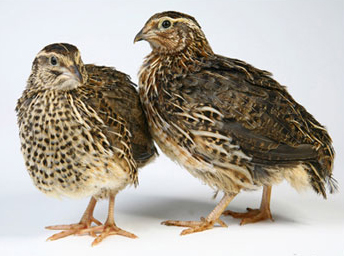 The Japanese quail, also known as Coturnix quail (Coturnix japonica) is a species of Old World quail found in East Asia. First considered a subspecies of the Common quail, it was distinguished as its own species in 1983. The Japanese quail has played an active role in the lives of humanity since the 12th century, and continues to play major roles in industry and scientific research. Where it is found, the species is abundant across most of its range. Currently there are a few true breeding mutations of the Japanese quail, the breeds from the United States are: Texas A&M, English White, Golden Range, Red Range, Italian, Manchurian, Tibetan, Rosetta, Scarlett, Roux Dilute and Golden Tuxedo.

Populations of the Japanese quail are known to mainly inhabit East Asia and Russia. This includes India, Korea, Japan, and China. Though several resident populations of this quail have been shown to winter in Japan, most migrate south to areas such as Vietnam, Cambodia, Laos, and southern China. This quail has also been found to reside in many parts of Africa, including Tanzania, Malawi, Kenya, Namibia, Madagascar, and the area of the Nile River Valley extending from Kenya to Egypt.

Breeding sites of the Japanese quail are largely localized to East and Central Asia, in such areas as Manchuria, southeastern Siberia, northern Japan, and the Korean Peninsula. However, it has also been observed to breed in some regions of Europe, as well as Turkey.

The Japanese quail is primarily a ground-living species that tends to stay within areas of dense vegetation in order to take cover and evade predation. Thus, its natural habitats include grassy fields, bushes along the banks of rivers, and agricultural fields that have been planted with crops such as oats, rice, and barley. It has also been reported to prefer open habitats such as steppes, meadows, and mountain slopes near a water source.

The morphology of the Japanese quail differs depending on its stage in life. As chicks, both male and female individuals exhibit the same kind of plumage and coloring. Their heads are tawny in color, with small black patches littering the area above the beak. The wings and the back of the chick are a pale brown, the back also having four brown stripes running along its length. A pale yellow-brown stripe surrounded by smaller black stripes runs down the top of the head.

The plumage of the Japanese quail is sexually dimorphic, allowing for differing sexes to be distinguished from one another. Both male and female adults exhibit predominantly brown plumage. However, markings on the throat and breast, as well as the particular shade of brown of the plumage, can vary quite a bit.

The breast feathers of females are littered with dark spots among generally pale feathers. Contrastingly, male breast feathers show off a uniform dark reddish-brown color that is devoid of any dark spots. This reddish brown coloration also appears in the male cheek, while female cheek feathers are more cream colored. Some males also exhibit the formation of a white collar, whereas this does not occur in any female members of the species. It is important to note that while this coloration is very typical of wild populations of Coturnix japonica, domestication and selective breeding of this species has resulted in numerous different strains exhibiting a variety of plumage colors and patterns.

Males tend to be smaller than females. Wild adults weigh between 90 and 100 grams while their domesticated counterparts typically weigh between 100 and 120 grams. However, weight among domesticated lines varies considerably, as commercial strains bred for meat production can weigh up to 300 grams.

The type of relationship exhibited between male and female members of Coturnix japonica has returned mixed reports, as they have been seen to exhibit both monogamous and polygamous relationships. Study of domesticated specimens reveals that females tend to bond with one to two males, though extra-pair copulations are also frequently observed.

The Japanese quail exhibits a quite distinct and specific mating ritual. First, the male will grab the neck of the female and mount her. After mounting the female, the male will extend his cloaca by curving his back in an attempt to initiate cloacal contact between him and the female. If cloacal contact is achieved, insemination of the female will be exhibited by distinguishable foam present in the female's cloaca. After successfully mating with a female, it is characteristic of the male to perform a distinctive strut. Females can either facilitate the mating attempts of the male by remaining still and squatting in order to ease the access of the male to her cloaca. Or, she can impede the attempts of the male by standing tall and running away from the mounting male. Females can also induce the initial sexual interactions by walking in front of a male and crouching. Males acting aggressively toward a female during the mating ritual has been shown to reduce successful matings.

Eggs tend to be laid in the few hours preceding dusk. Incubation of the egg starts as soon as the last egg in the clutch is laid and lasts an average of 16.5 days. Japanese quail females carry out most of the incubation of the eggs, becoming increasingly intolerant of the male throughout the incubation process. Eventually, the female will drive away the male before the eggs hatch. Thus, the females also provide all of the parental care to the newly hatched young.

Egg weight, color, shape, and size can vary greatly among different females of the Japanese quail population; however, these characteristics are quite specific and consistent for any one given female. Eggs are generally mottled with a background color ranging from white to blue to pale brown. Depending on which strain of the Japanese quail one examines, eggs can weight anywhere from 8 to 13 grams, though the accepted average weight is 10 grams. Age seems to play a role on the size of eggs produced as older females tend to lay larger eggs than their younger counterparts.

This quail species is also an avid dust bather, individuals undergoing numerous bouts of dust bathing each day. When dust bathing, this bird will rake its bill and legs across the ground in order to loosen up the ground, and then use its wings to toss the dust into the air. As the dust falls back down to the ground around the bird, it will shake its body and ruffle its feathers to ensure they receive a thorough coating. This behavior is believed to function in such things as simple feather maintenance and parasite removal.

The Japanese quails are domesticated forms of common quails just like domestication of Prussian carp into goldfish.

The earliest records of domesticated Japanese quail populations are from 12th century Japan; however, there is evidence that the species was actually domesticated as early as the 11th century. These birds were originally bred as songbirds, and it is thought that they were regularly used in song contests.

In the early 1900s, Japanese breeders began to selectively breed for increased egg production. By 1940, the industry surrounding quail eggs was flourishing. Unfortunately, the events of World War II led to the complete loss of quail lines bred for their song type, as well as almost all of those bred for egg production. After the war, the few enduring quail left were used to rebuild the industry, and all current commercial and laboratory lines today are considered to have originated from this population of quail.

8. Muneo Takaoki, "Model Animals for Space Experiments – Species Flown in the Past and Candidate Animals for the Future Experiments", Biological Sciences in Space, Vol. 21, pp. 76–83 (2007).